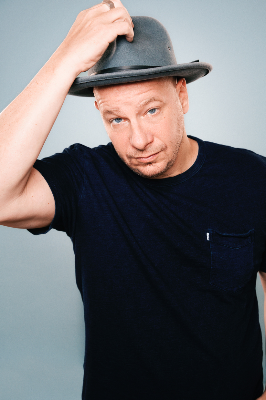 • Thursday, Friday Late, and Sunday Shows 18+ | All Other Shows 21+ Unless Otherwise Stated
• Two Drink Minimum Per Person Inside Of The Showroom
All Sales are Final
• All showtimes are subject to change. Valid Photo ID Required. *Please note that we won’t be able to seat incomplete parties

Jeff Ross is a respected comedian, writer, director, and producer also known as “The Roastmaster General.”

Currently, his wildly popular live show “Bumping Mics with Jeff Ross and Dave Attell” is streaming on Netflix as a three-part comedy special event. The show, which was shot over three nights at the iconic Village Underground in New York, showcases the kinship that exists between these two veteran comics and highlights special guests including Amy Schumer, Bob Saget, Paul Rudd and Michael Che.

As a regular on the Comedy Central Roasts, Jeff has roasted many stars including Justin Bieber, Roseanne Barr, Joan Rivers, Charlie Sheen, and The President of The United States, Donald Trump. Jeff's most recent Comedy Central Roast victim was none other than Bruce Willis.

These celebrity roasts have become a mainstay in popular culture and propelled roasting into the public eye. Building on their success, Jeff launched “Jeff Ross Presents Roast Battle” in 2016, a competition show in which comics go mic to mic in a battle of wits. Judged by some of the best comedy minds of our generation including Jimmy Kimmel, Kevin Hart, and Seth Rogen, Roast Battle, has introduced new stars and started a movement. Comedy Central has since taken the format international, producing versions of the show in Britain, Mexico and South Africa, with more international markets to come.

This past fall, Jeff took roasting back in time with the forthcoming Netflix show “Historical Roasts” where Abe Lincoln, Cleopatra, Freddie Mercury and many others took their turns being roasted. The series will premiere in the spring of 2019.

Jeff's comedy specials also turn roasting into social commentary. With “Jeff Ross Roasts Criminals,” “Jeff Ross Roasts Cops,” and “Jeff Ross Roasts The Border,” Jeff has used roasting to shed light on some of the more polarizing political issues of our time. These specials have taken him to a maximum-security prison, the Boston Police Department, and both sides of the Mexican border. He also hosts the podcast “Thick Skin with Jeff Ross,” which can be found on iTunes.

Jeff regularly tours with the USO to perform for our troops overseas. Most recently he traveled to Iraq with The Chairman of the Joint Chiefs of Staff, General Joseph Dunford, and performed holiday shows for the soldiers stationed there.